Well, that took longer than I thought!

To continue, I’ve been in New Mexico with mom and dad for a few days.  They are motorhome caravanners, Airstream to be specific, and have been on a southwest caravan for a couple of months.  They began in Moab, Utah (after having done the Lewis and Clark caravan the 2 months before that) and are concluding on Sunday.  I flew to Albuquerque last Saturday to join them for a few days.

In part I I told about the Balloon Festival, which continued to be spectacular.  The motorhome was parked in a lot facing the lift0ff field, and every morning at sunrise there were hundreds of hot air balloons in various stages of ascension.  Breathtaking in scope and vision.  Truly.  And because of the nature of the event, one is free to walk among the aircraft, chatting with the pilots and chase crew as they filled and heated the balloons.

When I last blogged, we were on our way to the Pueblo Indian Culture Center, where we spent most of the morning learning about the 19 tribes.  It’s a beautiful center with a courtyard for showcasing the native dances, and both an ancient and contemporary museum of history. 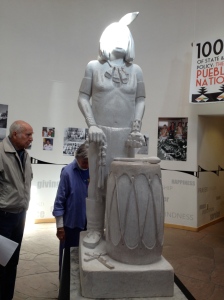 From there we tried to find not 1, not 2, not 3, but 4 different restaurants for lunch.  We ended up at El Pinto’s restaurant, allegedly a favorite Bushie hangout (I managed to dodge the Republican vibe if that’s true) for their spectacular and spectacularly huge dishes.  We opted for enchiladas, quesadillas, and of course sopapillas with honey. 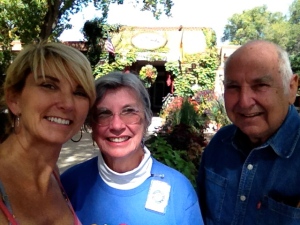 Then it was time for the caravan to move on, so off to Santa Fe we went.  Dinner the first night was at the Buffalo Thunder casino, along with a $10 credit, after the buffet, mom and dad hit the penny slots!  Wooohooo!!

The next day took us to downtown Santa Fe, where we saw old churches, shops, restaurants, and street vendors.  Then, in a dash, all the way up to Taos, where we went to the Taos Pueblo (no photography) and then to the Rio Grande Gorge Bridge.

Then, to cap off a long day, before dinner we scouted out the Kit Carson Memorial Park where we found the grave we were looking for.  That may not sound like everyone’s idea of fun, but when you travel with dad, it’s mandatory.  It’s an historian thing.

It was a quick 5 days, now it’s off to Anaheim with daughter Amy for another adventure.  She and squeeze Curtis are attending the National Recreation and Park Association Conference.  Ames graduates in December with an Outdoor Recreation degree from ETSU, and she’s hoping to make a few job contacts…next post will find me in daughterbliss!

Big shoutout to Glendy for dogsitting while I’m gone: