On my hippie farm, with my cows and goats and chickens, I have the most delicious compost pile.  Cow manure, chicken manure, goat manure, hardwood leaves, kitchen scraps, coffee grounds – it makes the most rich, earthy, healthy soil you’ve ever seen.  I’ve got a dual operation going:

But I also have dogs, and if you read my last post, you know I’ve added to the canine contingency.  And 4 dogs generate lots of poo.

In an effort to figure out what to do with the abundance of dog waste that accumulates in the yard (I have 8 acres, but who’s gonna walk more than 20 feet outside in the rain?  Not my guys!), I did a little Shit Research.  I won’t go into all the science, but the poop of herbivores vs the poop of omnivores vs the poop of carnivores has to do with amounts of nitrogen, enzymes, bacteria, and parasites.  The short version is that dog waste can’t be composted with other kitchen and farm waste (and neither, therefore, can human waste – a post for another day).

Just to be sure, I contacted my go-to science guy (Sam, if you didn’t know), and he confirmed what my research showed.  So it was out of the question to put the poop in the big compost pile.  But I still had a poop pile problem in the yard.

I googled that shit and found a variety of commercial set-ups to deal with this issue, but they were all extremely low in complexity and high in cost.  I’m bright, I’m capable, I’ve got power tools – I can do this!

I think I’ll tag this post Cottage Living.  I don’t have a Waste Products tag.  Yet.  I think I’m going to draw the line at a pit latrine. 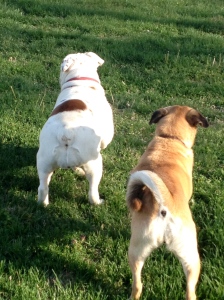 Edwin died on March 27.  I loved him.  I loved his big, fat, beautiful, juicy brain, I loved his irreverent, dry, southern sense of humor, and I loved his unrelenting compassion, desire for justice, and concern for children.

Edwin was the legal director for American Atheists from 2006 until his death.  He and his wife Helen were the originators of Camp Quest, a secular summer camp for children.  It had grown from a brilliant idea in 1996, to overnight and week-long camps located in many states, and UK and Switzerland.  Camp Quest offers children the summer camp experience including educational activities that promote critical thinking, ethics, scientific inquiry, and philosophy.   Edwin was the brilliant legal mind behind many civil rights and religious freedom lawsuits over the years, but I believe it was Camp Quest of which he was most proud.

I met Edwin in Des Moines at the American Atheist convention and was captivated by his charm.  He was lovely and encouraging to me as a first-year law student.   Edwin could be funny and serious and blasphemous, all in one sentence.  He was the quintessential cantankerous and curmudgeonly crank whose eyes twinkled behind his glasses under the brim of his leather hat.

Edwin was also an author and blogger.  Here is a post he wrote about the death of his lovely wife Helen.  Not long after I met Edwin, he sent me a copy of his book Baubles of Blasphemy.  I rationed the readings of his writings because they usually had a profound effect on me as a new freethinker just coming out of the daze of religion, and I needed the extra moments to digest the profundity.  We corresponded through email and even in this cold, impersonal digital format, his warm, witty personality peeked through.

Edwin and I saw one another at various freethinkers conventions, and always stole a moment or two to catch up.  He never failed to ask me about law school and how I was doing and what my plans were.  I saw him last in Austin, Texas, and was looking forward to seeing him again in Salt Lake City in April.  Edwin died on March 27.

But my sweet Edwin left behind not only a legacy of epic proportions in the way of Camp Quest, but also his two canine loves, Vaughn and Lucy.  Edwin’s family put out the word that these two honeys needed a home, and they needed to stay together, if possible.  It took me about 10 seconds of reflection before I knew I wanted to provide a home for these babies.

So I introduce to you:  Vaughn and Lucy. 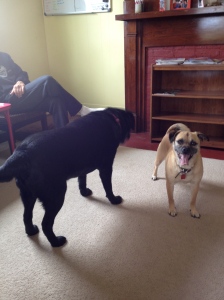 We’re getting to know one another.  When they learn to trust me, I plan to solicit any legal genius that Edwin shared with them, but I can be patient.  Right now we’re working on positioning in my office while I’m studying, and smelling everything that can be smelled on a farm.

What a delight these two furries are.

And what a joy and an honor and a privilege to have known this man.

Before you return to wherever you were before you were born, it might be a good idea to so live that people remember you fondly. This is not a dress rehearsal. Life ends / Tao flows.
Don’t take life too seriously; you won’t get out of it alive anyway.