Back in the Boro, back on the bike

Well, the Christmas Party’s over…

What a fabulous month it was with the kids in Colorado!  The skiing, laughing, eating, drinking, talking, all surpassed my highest hopes.  What a joy and a pleasure to observe and interact with one’s children as adults!    I love hearing their opinions, listening to their senses of humor,  sympathizing with their concerns, celebrating their choices, and anticipating their futures.  I am so grateful to them for their letting me into their lives like they do, and I’m so proud of the people they are.

Jesse and Aden were the first to leave on Tuesday.  He was such a pleasure, and I’m  so grateful to John and Shannon, his parents, for letting him join us for a few days.  He did great on the slopes, and we even had him saying that he shredded the half-pipe, which of course he did!

Then on Wednesday, Amy drove Glenda and me to the airport in Denver, where we would fly together to Atlanta, then go to England and Nashville, respectively.

Then, finally, this morning, back to reality.  Back on the bike at around 2:00 for a quick 15-mile ride to pick up Jesse’s truck in Smyrna.  I had on my new riding gloves, which I loved, and my freaky goggles, which I LOVED, and I was on the Baixbaix.  It was cold as hell, but the bike felt good.  We had a little tire mishap before riding out of the driveway – one of my slick red tires had a littleblowout when Jesse went to add air, but he got it fixed in a flash and we were off. 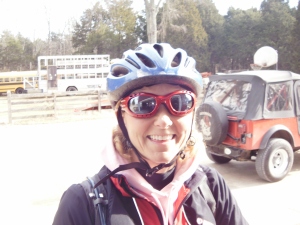 I’ve begun making the arrangements for my accomodations in New Zealand.  Son Sam and girlfriend Laura will be in school in Palmerston North (near Wellington on the North Island), but that’s a fair distance from Lake Taupo, so I’m looking for a hostel/hotel for about 2 weeks before the race.  Sam’s 2-day Coast-to-Coast New Zealand race (kayak/trail run/mountain bike) is Feb 12 and 13  (he and I are experiencing the same pre-race freakouts:  “What am I doing?  WHO would attempt a race like this!?”), so I have a need for a home for about 2 weeks, preferably in the Lake Taupo area, so I could possibly train in the area and even swim the lake!  I’ve sent a couple of emails, and I’ll post when I hear something back.

No iPod today because we were on main roads, but my iPod has experienced Epic Fail; when I restored it on iTunes, I lost all my music!  Not good, cuz I don’t have all my music on my laptop.  Sad.  So I’ll start re-downloading what I have and reconstruct from there.
Thanks for reading!