As with so many other bloggers with whom I interact, and whose blogs I read, I am, even if subconsciously, always on the lookout for topics about which to blog.  I hesitate to write that, because I don’t ever want my friends and family to think they can’t talk to me about a particular subject because I’ll then write about it.  But so many interesting conversations come up on a daily basis that I want to put down to the 21st century version of pen and paper, the keystroke and data.  I promise that if I blog about something we’ve talked about, I won’t identify you unless I’ve asked you for your permission.

So…I had a conversation with a friend recently, about thankfulness, and the idea of blessings.  I’ve just written a  post about being thankful, without having an entity to thank.  My friend is a believer, and our discussion was about how he felt that all those things for which we are grateful were actually blessings from God, whether I acknowledged that or not.

I asked if He thought God’s plan included any compassion on the part of God.  Why, whatever His plan may be, allow children to be born into starvation, in a war-torn country, to suffer for 5, or 6, or 7 years, witnessing death, feeling pain, to die a horrible death – whatever could God’s plan be with that kind of misery, multiplied by the thousands?

He hesitated, but then concluded that maybe all of that suffering was a way to get the attention of each of us, individually, to turn to Him.  This is not an immoral man.  I think because he’s heard this his entire life he’s accustomed to how it sounds.  It was not unfamiliar to me, as a former believer, and yet even only a few years away from the faith myself, I was utterly horrified at hearing him say this.  I asked if I could repeat back to him what I heard him say.  I described what life could be like for such a child, the things she might see, and feel, the pain, the agony, the absolute and complete suffering, all to get me to talk to God?  When He could, in the blink of an eye, say that to me Himself, and save this child, and thousands like her, from this fate?  I don’t know if I tried if I could come up with a more blasphemous thing to say.

He backpedaled and said he reconsidered.  He said no, maybe that was not the reason.  He’s imperfect and he should have thought a little deeper before he answered.  He said what he should have said was that, no, God did not do that.  God was only the author of all things good, that the evil and suffering in the world were the work of Satan, and sin.  This “metaphorical child” (yes, he said that) was in pain and sorrow because Adam had originally sinned, the world became imperfect, and evil came into the world.  Now she suffers because of that.  I pointed out that that was really a variation on what he had just retracted.  Could God or could God not intervene and alleviate this child’s suffering?  Yes, he said, He could, but He just chose not to….right back to getting our attention through the suffering of this child.

He reconsidered again, and said that he thought he could express it best this way.  God knows ahead of time how to get the most people to turn to Him, since that’s what he wants from every single person on the planet.  It hurts him to see suffering, he doesn’t want those people to suffer, but in the aggregate, that’s the way to get the most “bang for your buck” (my words, not his).  I think he took my stunned silence as acceptance of his position.

Of all of the reasons I push back against religion, this is probably the one that motivates me the most.  This is a good man, a moral and loving husband and father.  I think his compassion lever is malfunctioning, and it’s malfunctioning because he has had a lifetime of having to justify the unjustifiable, to moralize the immoral, to accept the reprehensible.  The Bible does tell about God’s judgement and wrath and killing and destruction to achieve his means, very clearly, and in numerous places.  Believers are left having to “do” something with all of these passages.  And that something fucks up the system.  Our natural compassion is blunted.  When a tsunami kills thousands of people, and it’s a given that God is in control of the tsunami, we have to come to terms with what to do with that information, and we push it and shove it and hammer it in, until the workings of an imperfect but highly functional biological, social, and psychological system of care and compassion are skewed beyond recognition. 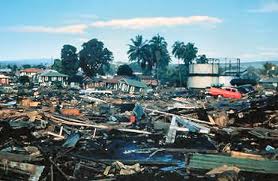 Life is random.  And unfair.  And sometimes we get the good stuff, and sometimes we get the bad stuff.  There are things we can do to affect our fortune, for the good and bad, and there are things we cannot effect.  The danger with thinking that the good things in your life are there because God loves you so much, is the unspoken implication that the bad things in someone else’s life are there because God doesn’t love them quite so much.  And if God doesn’t care about them, maybe we don’t have to either.  My friend tried to back away from this, and stepped right into the next steaming pile of poo with his argument about God’s plan.

The problem of suffering.  Think.  Think again.  Then think again.  Just don’t call me blessed; I want no part of it.

5 thoughts on “Don’t call me blessed”